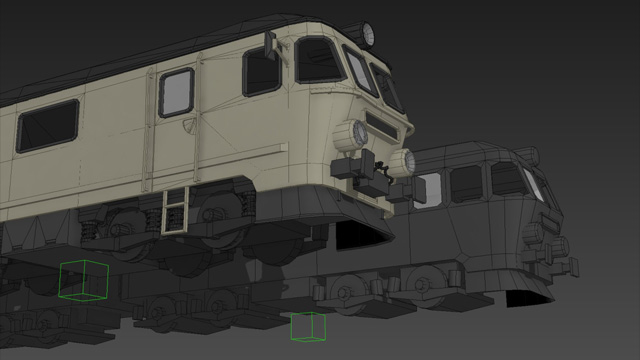 The Bits and Pieces

In this post, I thought I would share some images of the 3D models I made for the game and talk a little about how (and why) they were made.

One thing you’ll notice right away is how simple the meshes are. Our general approach when sketching out environments was to subtract until only the essence remained. This was a key ingredient in making them feel desolate, melancholic. Whatever detail came in later, as we polished the game, was subtle texture, not high contrast clutter. The purity of the original composition had to be preserved and key story and gameplay elements had to remain in focus.

The same process applied to objects. We weren’t interested in dense detailing – we wanted to iconify them.

Such simple meshes were very easy to produce and had a low memory cost, so we felt free to make as many unique objects as we felt necessary. They also had the advantage of being easy to iterate on and discard – key elements of the creative process here at Playdead.

Unlike most objects in the game, this microfiche reader actually uses a texture, but is otherwise a good example of how we stripped away details or made them more crude.

In-game test to check level of detail and see how the model catches the light.

Originally designed as a type of bio-something delivery/collection device mounted on the sphere windows.

One of those discarded ideas.

Analog Cold War gear was inspired many of our props. It carries that little sadness of something that is obsolete and of course has connotations of control, surveillance, oppression, etc.

Some objects, like these depressing-looking vending machines, were used to keep the environments from drifting too far away into the realm of sci-fi. Keeping the right balance was important.

You’ll find these tapes scattered in a number of places throughout the game. Moments lost in time I guess?

I made this train set for that elevated track above the rooftop sentry section but they later ended up also being used in a sort of train cemetary in the sewers.

The first van we had looked too contemporary so I whipped up this – the classic 80s abduction van.

These 3DSMax screens represent pretty much what the props looked like in-game. In 95%of cases, the material used was a simple shader with no specular, bump or even diffuse map components. All these were applied locally by way of decals.